The pain of moving

I've been spending (some of) my free time packing. My living room, in its current state of disarry: 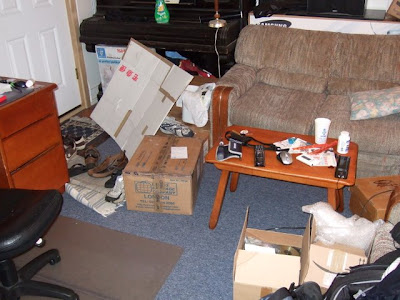 Only a few more days left!

I also finished watching Utawarerumono. It had lots of action that wasn't totally mindless, and it kept me on the edge of my seat for much of the series, but towards the end, it sort of fell apart... and the ending! The ending was so cheesy! It was nice to see what all the characters were up to at the end but... ugh. There is an OVA out this month, so we'll see if that adds much to the story.

I've also been slowly practicing guitar. My fretting hand has developed some nice callouses, and I can play a couple basic chords. Right now I'm just trying to work on learning more chords, some basic picking and strumming, and trying to switch chords quickly. It's slow going, but I'm making some progress...