Again it's time for another self-indulging weekly anime ranking! I don't even know why I do it, but it gives me something to write about.

7. Dragonaut (18)
No picture, because I don't think it's worthy of one :P. For some reason, the setting is now one year later and shit is going to go down in the next episode. This has so many plot holes and loose threads! The animation is nice though. 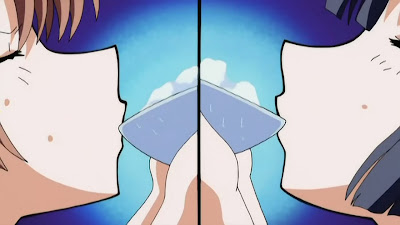 What a waste
Why would you race to finish a frozen dessert? That's incredibly idiotic! Anyway, looks like Hayami and Yui made up in this episode. The animation quality is pretty mediocre, the plot is still kind of random, but the next episode should have lots of drama. This probably wouldn't be so bad if it wasn't going up against True Tears or Clannad. 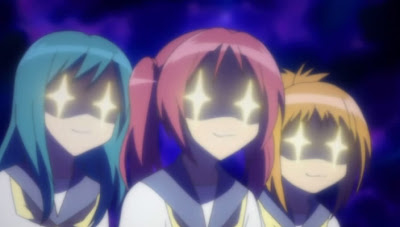 Bad girls
Kirino is worried about her mom, and the competition at the preliminaries starts. This is mostly a transition episode to setup for the competition in the next episode. Still, the more serious side of Kirino was nice to see, and it's an enjoyable watch. I think Bamboo Blade's place in my ranking is more due to my preference for drama over pure comedy, as production-wise, Bamboo Blade is probably above Hatenkou Yugi and Gunslinger Girl. 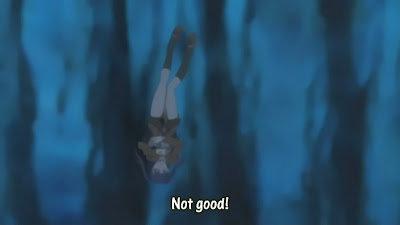 Such a kidder
Another independent episode, this has the trio going on a dubious treasure hunt. The episode is full of witty banter between the three characters, but the treasure hunt was kind of lame. I find the interactions between the characters are the real driving force and the reason I keep watching. 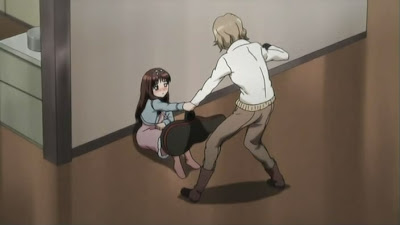 What a messed up world
This episode reintroduces Angelica back as a member of the killer loli squad. This covers chapter 16 of the manga. Overall, it followed closely to the story of the manga, and it was good to see it animated finally, but the low production quality detracts from the story a bit. I think the blush lines were overdone a bit. Anyway, Angelica seems to need a lot of conditioning drugs to maintain her sanity, and it's rather sad to see her break down. Priscilla said it best when she said that Angelica's done nothing wrong and it's all their (the organization's) fault. 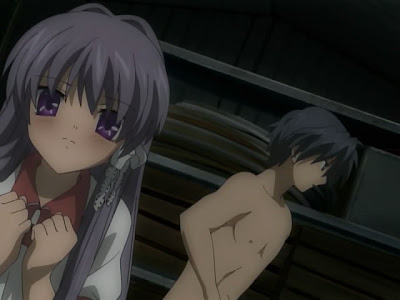 Oh my!
Things heat up on all fronts in this episode, with all girls making progress on Tomoya. Clannad is able to balance drama and comedy pretty much perfectly. I like how KyoAni is able to interweave all the girls' routes together (though the Fuuko appearances are just WTF), and the music during the storeroom scene was just lollerful. 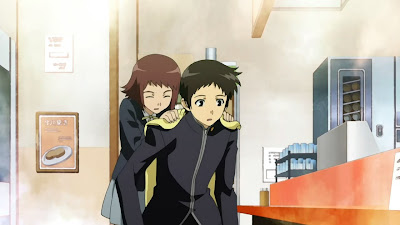 False hearts
I continue to be impressed by the consistent quality PA Works is putting out. The animation is amazing, but not just because it's aesthetically pleasing; there is attention to detail in body language and facial expressions that you don't see in a lot of anime. This was another awesome episode, with development in all three girls. Noe is still naive and cute, Hiromi is still conflicted, Ai is going to lose, and Shinichiro is a bastard for lying to Noe. I don't know what Shin's mom's problem is with Hiromi's mom, but it's kind of sad :(. Some other opinions on True Tears.
Posted by clicq at 12:30 AM