I have spent most of my free time these past few weeks researching televisions. I finally decided that 32" was just not big enough to watch anime, and so I went shopping for a new TV.

I was looking for an LCD with a good value/performance ratio. Basically, I just wanted an LCD with really good picture quality for really cheap. I crossed out the typical cheap brands, because while they're good values, they all seem to make some compromises in picture quality. From reading AVS Forum's LCD forum, I narrowed my choices to: I was originally planning on getting a Toshiba 42XV540, but it seems to have issues with poor viewing angles and off-colored blacks. Plus, it's not any cheaper than the much better Samsung 40A650. Amazon has a great deal going on the Samsung 40A650, and it has pretty much everything you'd want -- great picture quality, 10-bit display panel, and 120 Hz. However, some of the great picture quality is from the glossy screen, which may be a problem for lots of people with bright rooms. There are also reports that, possibly due to the coating of the screen, blacks have a purplish tinge.

The TV I ended up buying is the Samsung 46A550. It has a semi-glossy screen, only an 8-bit panel (but 10-bit processing), but oh boy it is big. The picture quality is very close to the A650 series, but without the added kick of the glossy screen. I'm kind of bummed about not having 120 Hz, but I didn't think it was worth losing 6" o screen over. And to top it off, it was about the same price as the 40A650.

So how is it? Well, I'll let pictures speak for themselves: 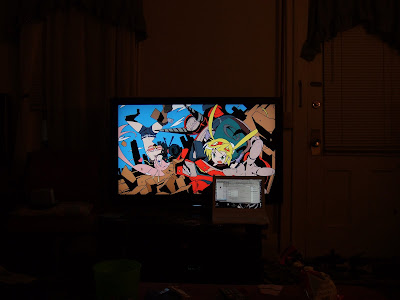 Everything being said, I'm happy with the TV, and I'd totally recommend anybody looking to spend about $1500 on a TV seriously consider it.
Posted by clicq at 11:20 PM